NO PEOPLE LIKE SHOW PEOPLE: It took filmmaker Brigitte Berman to get the ball rolling, but after the Toronto International Film Festival premiere

of her documentary on Hugh Hefner, a major Hollywood biopic is finally going ahead. Producer Brian Grazer (24) recently met with Juno screenwriter Diablo Cody about the project, and Brett Ratner (X-Men) is apparently lined up to direct, with Robert Downey Jr. favoured to play Hef … shhhh, it’s a secret, but my spies tell me irresistible funny girl Monica Parker is currently fine-tuning a new one-woman show cunningly called The Weight Is Over.  Can’t weight, uhhh, wait … and Rick Mercer and Rush rock legend Alex

Lifeson go skydiving tonight — the hard way — by attempting to float atop 225 km/h winds generated by a jet engine (!!!) at the Niagara Freefall Indoor Skydiving challenge. And believe me, ‘freefall’ is the word for it. Catch them tonight at 8 pm on the Rick Mercer Report on CBC.

UP IN ARMS: On Thursday night Toronto theatergoers will see the Canadian premiere of Strange News, a 30-minute multimedia work about the plight of

child soldiers. The work, composed by Norwegian Rolf Wallin with text by Belgian actor/director/writer Josse de Pauw, is narrated by the young Ugandan actor Arthur Kisenyi, and comes to us after breaking theatrical ground in Oslo, Birmingham, Porto, Chicago, and Copenhagen. Filling out the bill is a performance of Igor Stravinsky¹s classic A Soldier¹s Tale, narrated by the legendary Martha Henry and directed by Peter Moss. For tickets call the St. Lawrence Centre box office at 416-366-7723 or just click here.

FLICKERS: Why does news of a Tribeca Film Festival in the Persian Gulf remind me of a New Yorker cartoon? Nonetheless, the 31-film festival opens this

week in Doha, Qatar’s capital, with Robert De Niro, Tribeca’s co-founder, expected to be on hand for the opening film, the Hillary Swank-Richard Gere opus Amelia. Unlike red-carpet filmfests in Dubau and Abu Dhabi, Doha is looking to showcase independent films (Steven Soderbergh’s Informant, Michael Moore’s Capitalism: A Love Story) — but hey, it’s still the middle east. Both Doha and Abu Dhabi programmed Bahman Ghobadi’s No One Knows About Persian Cats, a film shot covertly in Iran, but none of the Gulf festivals have programmed a film from Israel, and if your passport is Israeli, you can’t get there from here. Intrigued? Yeah, me too. To catch up with Larry Rohter’s report in last week’s New York Times, just click here. 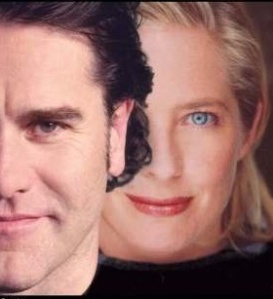 Factory Theatre at a packed Sunday matinee, and now I know what all the fuss is about. Everything about this witty, provocative production is absolutely top-notch, from Bretta Gerecke’s cleverly engaging set to playwright Fraser’s fast-paced cinematic staging and direction. Ashley Wright and Julie Stewart are spectacularly good as the parents, Andrew Craig and Susanna Fournier are outstanding as their confused offspring, and David W. Keeley’s subtle but sly portrayal of the returning restauranteur who unhinges all of them makes this laugh-out-loud dramedy work brilliantly. Don’t miss it. But you will if you don’t act now, because counting tonight there are only six (6) performances left. To snap up your last-chance tickets just click here. And enjoy!

Come to the Cabaret.