When did live theatre become a synonym for marathon?

Coming soon to our town, for the very first time, is the entire City of Wine seven-play cycle about the ancient Greek city of Thebes by yet another Dickens — Kingston playwright Ned Dickens. Billed as “an unprecedented event in Canadian theatre history,” City of Wine features 105 of Canada’s newest talents from the graduating classes of theatre schools across the country, in seven, count ‘em, 7 productions mounted by the award-winning Nightswimming theatre company for Theatre Passe Muraille. 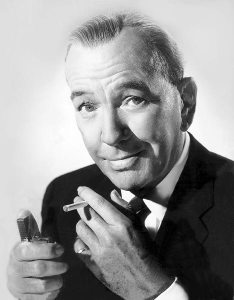 And just when I was thinking that seven could be heaven, I watched Rick Mercer and learned that Shaw Festival chief Jackie Maxwell is staging all 10, count ‘em, 10 of Noel Coward’s one-act plays this season, and that yes, there are three consecutive days in the schedule where you can actually get to see all 10 Noel Coward one-act stands.

“Do you get lunch?” asked Mercer.

“You get a Noel Coward lunch,” Shaw Festival headliner Corrine Koslo assured him – “a martini and a cigarette!”

You can catch Mercer’s festival apprenticeship — in a Sondheim musical, no less! – tomorrow night at 8 pm on CBC.

MEAT & GREET: Still-gorgeous Candice Bergen, as magnetic on Boston Legal as she was on Murphy Brown, admits she has a strong feelings about eating any kind of four-legged animal.

“Also some two-legged,” she adds, “like duck. I will never eat duck. And I haven’t eaten pork or beef, especially veal, for 35 years. This started because I suddenly started to find people carving into these bloody haunches of meat so disturbing. And after walking through the former huge market square in Paris, with hundreds of carcasses hanging side by side, it just repulsed me and I decided to keep my own half-assed vegetarianism.”

She says she doesn’t mention it at dinner parties.

“I just eat around the meat. I’m not a pain in the ass, but I cannot eat meat now — even some that looks and smells delicious, like barbecued ribs or prosciuto — without feeling like I am betraying animals.”

BEFORE THE GAY GUY SEES YOUR BOOBS: Funnybone tickler David Sedaris (When You Are Engulfed In Flames) admitted to Sharp magazine interviewer Jeremy Freed that he’s a major fan of Sidney Lumet’s masterwork Before The Devil Knows You’re Dead.

“I don’t understand why they just didn’t give an Academy Award to everyone who was in that movie,” he told Freed. 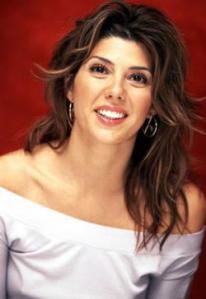 He was also admitted that he was somewhat bedazzled by Lumet’s wide-screen exposure of Marisa Tomei’s breasts.

“I’m curious, too, because I’m not a good judge of these sorts of things, were those really Marisa Tomei’s breasts? Or do you think that she had something done? She must be, like, 45 or something,” Sedaris reckoned.

But why the fascination with Ms. Tomei’s ta-tas?

“Because I’m a homosexual and I don’t see many breasts, I always thought that breasts, like, just looked a certain way. I didn’t know there were so many styles of them. But Marisa Tomei’s breasts look like a mermaid’s breasts.

Then again, if you were her, you wouldn’t be David Sedaris.