Julie’s on stage, Dan’s discussing Ghosts and Meryl’s off to Rome for yet another film feast

OUR TOWN: Currently on screen as Graham Abbey’s ex in the crackerjack CBC thriller The Border, Julie Stewart has made some interesting choices since

her CTV Cold Squad series was detoured by CBS. She’s currently on stage here at the Factory Theatre starring in Brad Fraser’s rave-winning new comedy True Love Lies. Be warned: Fraser’s new eyebrow-raiser closes in two weeks, so order those tickets now … writer-actor-vintner Dan Aykroyd and his pop Peter Aykroyd, a father-and-son duo to celebrate, sit down with Indigo chief Heather Reissman tonight at 7 pm at the Manulife store to discuss Aykroyd Sr.’s new book, A History Of Ghosts. Sounds like a sensational gift for Hallo’een … and director Ruba Nadda told audiences at the opening of Cairo Time here

last weekend that shooting the romantic drama in Egypt was a logistical nightmare, made even more excruciating by the extreme heat. “Much of the time when we were shooting,” she recalled with a grimace, “it was 50C.”  However, she added, while the rest of the cast sweltered under a relentless sun, the film’s star Patricia Clarkson continued to remain calm, collected and, well, almost cool. “Patricia is a southerner, born in New Orleans,” Ms Nadda explained admiringly. “The woman doesn’t perspire!”

PRIVACY POLICY: During her visit to T.O. last week Meryl Streep said she has always strived to keep her private life private. “I just have never been

comfortable using my children as little props to make me interesting or darling or whatever I’m supposed to be,” she told interviewer Johanna Schneller. Streep, who is married to sculptor Don Gummer, said she’s unhappy when journalists ask her to talk about him. “Don doesn’t want me to talk about him in a ladies magazine, you know. He’s a serious artist who has a life that doesn’t deserve to be reduced to a caption.”

La Streep is en route to Rome where she will be awarded the Marcus Aurelius award for lifetime achievement at the fourth annual Rome Film Festival. She’ll 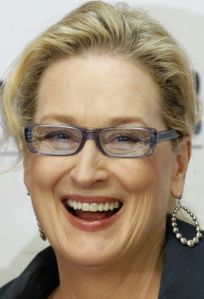 STREEP: off to Rome

participate in an onstage conversation about her career spanning back to her very first film, 1977’s Julia. Jane Fonda was already cast as Lillian Hellman when legendary director Fred Zinneman flew Streep to London to test for the title role. When he gave it to Vanessa Redgrave instead, he asked Streep if she would be willing to play one of the smaller roles. “And of course I would have been willing to do their laundry!” And the rest, as they say, is history.  Previous recipients of the Marcus Aurelius award include Al Pacino and Sean Connery, and Czech director Milos Forman is president of the six-member jury. The festival, also known as the Rome Film Feast, opens tonight.

IT’S NOT ALL THAT FUNNY TO HIM: Monty Python alumnus-cum-laude John Cleese, back on the boards in a blatantly autobiographical one-man show, 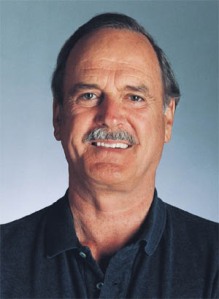 calls his new theatrical venture his “How to Finance Your Divorce Tour.” He says he needs money because of the expensive divorce settlement with Alyce Eichelberger – but is he bitter? Well, okay, maybe a little. “I’m paying $20 million to a woman I believe is the love child of Bernie Madoff and Heather Mills!” snorts the 70-year-old funnyman. “Imagine how much I would have had to pay if Alyce had contributed anything to the relationship – such as children or a conversation!”