Okay — where was I? Oh yes, I remember. Taking a break from blogging. Apparently that’s over now.

EVERYBODY’S TALKING:  And no wonder — the first glimpses of CBC’s big Sunday night movie, Sunshine Sketches Of A Little Town, look sumptuous. And I admit it — I’m a sucker for an all-star cast. Not that the producers, Alliance

Atlantis alumni Michael MacMillan and Seaton McLean, had much trouble reeling them in. “One of the best screenplays I’ve ever read,” says leading lady Jill Hennessy. Ms Hennessy,  currently on screen wrangling Dustin Hoffman on HBO’s new series Luck, clearly loved every minute of the summer shoot, as did Gordon Pinsent, who plays her son. (Yes. Really. You’ll have to watch it to find out.) Pinsent, who starts shooting a new movie in Mexico next week, describes it as “one of those rare filming experiences when we couldn’t wait to get to work in the morning.” Then again, Hennessy and Pinsent were

TALKING THE TALK: Ryerson Theatre Club devotees were among the hundreds of floodlights fans at Tuesday’s performance of Cruel And Tender  at the Bluma Appel. After their stunning 90 minute tour-de-force, stars Arsinée Khanijan and Daniel Kash joined their director Atom Egoyanin the theater lobby for a 15-minute Q&A with interested audience members. How interested were they? Theater Club reps had to call a halt after 40 minutes, but some folks still hung

around just long enough to meet Egoyan and share their take on his production of Martin Crimp’s reimagined Greek tragedy. The hypnotic drama runs through next Saturday Feb. 18 … Jim Brochu has returned with his celebrated salute to Zero Mostel, Zero Hour, directed by Piper Laurie (yes, that Piper Laurie) … and no, his reviews this time ’round were not exactly love letters, but clearly Ronnie Burkett’s audiences disagree. Factory Theatre has added six more performances of the marionette master’s new show, Penny Plain, with tickets now available through March 4 … meanwhile, Robert LePage’s Blue Dragon continues to dazzle at the Royal Alex, In The Heights continues to rock North York at the Toronto Centre For The Arts, War Horse opens tonight at the Princess Of Wales and Potted Potter opens tomorrow night at the Panasonic. Talk about an embarrassment of theatrical riches!

COMEBACKS: Great news for those of us who missed them first time ‘round — two rave-winning theatrical events are set to return to our town. Kim’s Convenience, the runaway hit by Soulpepper Academy alumnus Ins Choi, wraps up its current run this weekend but will be back May 17-June 9. And yes, 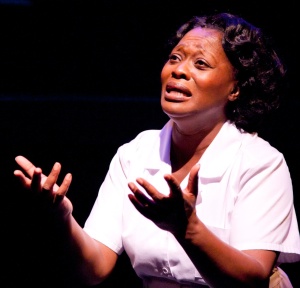 it’s a good idea to order your tickets now. As you may recall, the play about a Regent Park Korean convenience store was the sleeper hit of the 2011 Toronto Fringe Festival … and the National Ballet will launch its 2012-2013 season with the return of Alice’s Adventures in Wonderland by Christopher Wheeldon on November 10–25. A co-production with England’s Royal Ballet, Alice was an SRO smash when it premiered here last year. And yes, it’s a good idea to order those tickets now too … meanwhile, stage and screen showstopper Arlene Duncan, so endearing as the unsinkable Fatima in Little Mosque On The Prairie, is winning standing Os nightly at the Berkeley Street Theatre. Ms Duncan is the crown jewel in Caroline, Or Change, the latest theatrical gem from the phenomenal Acting Up stage company. CanStage and Acting Up added one more show of the musical last night to accommodate public demand, but all 25 scheduled performances sold out so quickly that surely an encore should be considered? And soon, please?

SEE/HEAR:  National Ballet star dancer Guillaume Côté is the latest hot ticket on YouTube with his  stunning short film Lost in Motion. Directed by Ben Shirinian and choreographed by Guillaume, the three-minute film really is something to see — even if it makes you want to join a gym before it ends. The high-flying M’sieu Côté will be performing with Kings of the Dance in Manhattan February 24–27  — d”ya suppose he made that video just to freak ’em out? — before returning to star in Sleeping Beauty, March 10–18, 2012, and The Seagull, March 21–25, 2012. Meanwhile, if you haven’t seen Lost In Motion yet, you don’t have to take my word for it — just click here. And enjoy!