NO BIZ LIKE SHOW BIZ:  Savvy scene-stealer Mary Walsh returns to Toronto next month in her new one-woman play, Dancing With Rage. The show, set to run March 6-31 at Theatre Passe Muraille,  incorporates both new 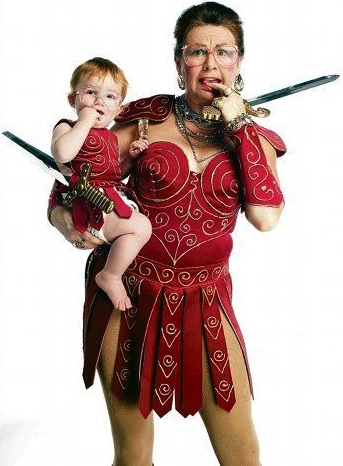 and  familiar faces, most notably 22 Minutes alumni Dakey Dunn, Connie Bloor and the legendary Marg Delahunty. Walsh’s last stage stint here was almost two years ago, at the Panasonic with Andrea Martin and Louise Pitre in Love, Loss and What I Wore, directed by Karen Carpenter. Carpenter is also directing Dancing With Rage and she and Walsh still have to decide if they’ll tour the show after it closes here … Meryl Streep and Julia Roberts are set to co-star in the film version of Tracy Letts’ Pulitzer Prize-winning August: Osage County. John Wells will direct …  the cast of Ghost will perform a sneak peek of the

show on Jimmy Fallon’s late show tonight before the West End musical hit even begins its Broadway previews … and  remember Slings  & Arrows, the brilliant take-off on Stratford and its oh-so-theatrical inhabitants?  Paul Gross, Martha Burns and Stephen Ouimette were sensational, and newcomers Rachel McAdams and Luke Kirby weren’t too shabby either. New York Times writer Neil Genzlinger recently suggested that NBC’s much-ballyhooed Smash should avoid dumbing down its storylines and aim higher. “The writers,” he said, “would also benefit from watching a few seasons of Slings & Arrows, a terrific backstage television series that was smart and proud of it,” he advised. Challenging viewers “to keep up, as Slings and Arrows did, is ultimately more rewarding.”

IF YOU GET CAUGHT BETWEEN THE SUN AND NEW YORK CITY:  It was just a publicity stunt for the new sci-fi movie Chronicle, written and directed by director John Landis’ chip-off-the-old block Max. But it sure got people talking. To see how they did it, cick here. 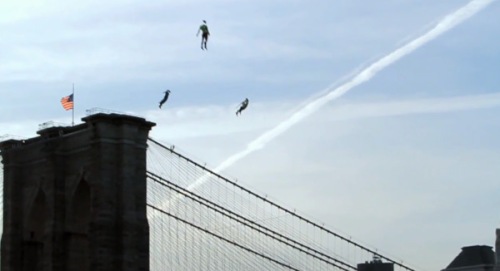 A BRIDGE TOO FAR: Unless you're flying over it, of course ...

NOW IS THE HOUR:  Finally caught up with Jim Brochu‘s much acclaimed performance in Zero Hour, and although I didn’t see how his one-man show could live up to its advance publicity, it easily surpassed it. In addition to being an

extraordinarily disciplined and gifted actor, Brochu is also a brilliant writer and storyteller who is never less than engaging, so you don’t have to be a rabid fan of Zero Mostel to be captivated by his reconstituted presence on stage. I know several long-term admirers of Mostel who have been wowed by Brochu’s tour de force, and after seeing him in action, I can certainly understand why. His personal revelations, including Mostel’s bitter estrangement from his family, are tough and touching. His backstage stories, from his account of Lucille Ball testifying to the House Committee on Un-American Activities to his palpable loathing for

HANGING OUT: Merman & Brochu at Sardi's

Broadway blabbers Elia Kazan and Jerome Robbins, are unforgettable. The Zero Mostel we prefer to remember is the lovable clown from The Producers, the madcap jester from A Funny Thing Happened Our The Way To The Forum, the Jewish patriarch who wished he was A Rich Man in Fiddler On The Roof. But Brochu is a true creature of the theatre — his caricature hangs next to Ethel Merman’s at Sardi’s — and accordingly the artist Brochu reincarnates for us has to fight to be in the spotlight. Zero only gets to star in Forum because first choice Milton Berle and second choice Phil Silvers both turn it down. And although his portrayal of Tevye is burned into the heart of Broadway memory, he was third choice for that one too. (First name on the Fiddler producers’ wish list was Danny Kaye.)

When the curtain finally comes down — all too soon for some of us — the fact that we feel like we’ve just spent the evening with Zero Mostel, and not a carbon copy, is further testament to Brochu’s great skill as an actor. On stage here at the Bathurst Street Theatre through March 11, Zero Hour is a fascinating and formidably funny showcase for both of them. Don’t miss it.