NO PEOPLE LIKE SHOW PEOPLE: Where is Tina Fey these days? Everywhere, promoting her new movie with Steve Carrell on every talk show on the dial, Yesterday it was

Oprah, this morning it’s Regis & Kelly, and this weekend she’ll host Saturday Night Live with Canadian pop music phenom Justin Bieber as her musical guest … despite the rave reviews she won when her hypnotic Hugh Hefner documentary premiered at TIFF last September, Oscar-winning director Brigitte Berman returned to the edit suite in January and has emerged with an even sleeker version. Last month she screened it to sell-out crowds and positive press notices at the Miami International Film Festival and at the Museum Of Modern Art in Manhattan, the latter as part of the prestigious

MoMA Canadian Front organized by MoMA’s Larry Kardish and Telefilm Canada festival booster Brigitte Hubmann. “At the first screening in New York Tony Bennett, Dick Cavett, Geoffrey Holder, Dr. Ruth and Christie Hefner were in the audience,” reports Berman, “and the response could not have been more enthusiastic!” This month she’s off to introduce the film at the  Sarasota Film Festival, and next month she’ll fly to L.A. to join Hefner when UCLA hosts a special screening of the film in his honour at the Billy Wilder theatre … Amber Marshall invited her Heartland fans to help her find a new name for her foal, “the horse soon not to be known as Harry,” and has been swamped by thousands of suggestions. Now all she has to do us sort through them all and pick one! … international filmfest planner Hannah Fisher is packing her bags for Poland, where she’ll welcome Aussie director Jane Campion and Bollywood superstars Amitabh & Jaya Bachchan to Krakow and The Off 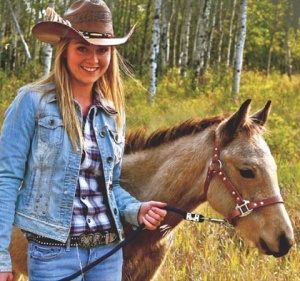 MARSHALL: she's not wild about 'Harry'

Plus Camera Film Festival of Independent Cinema … and New York gossip girl Liz Smith is not a fan of Roman Polanski. “Let let him submit to the law as he should have years ago,” says Liz flatly to her devoted wowOwow.com readers. But that doesn’t change her belief that Polanski is a great filmmaker. Ms. Smith is an unflagging champion of his new Pierce Brosnan-Ewan McGregor thriller The Ghost Writer, which she insists is only “a whisper away from being as great as Chinatown. It is a tension-filled, politically based noir with just enough twists to keep you slightly off-balance but never off-track. This one makes you think and demands all your attention. One deep dig

into the popcorn and you’ll miss something.All the performances are superb – wonderful turns by Kim Cattrall and Tom Wilkinson – with an especially great hand to Olivia Williams. She is the prototypical noir female – in danger, dangerous, impossible to know. And better if you don’t!”

The Ghost Writer is stiill on view at a neighbourhood theatre near you.

P.S. To REPUBLIC OF DOYLE fans: Don’t miss tonight’s first-season finale of the Allan Hawco hit series at 9 pm on CBC-TV. And don’t be surprised if you hear people talking about it tomorrow. My spies tell me it’s quite an eyeful!