Strombo gets Fox, Mosque gets manipulated, Montreal gets Whoopi & Rick gets stung

TONIGHT, TONIGHT: Your boyfriend George Stroumboulopoulos kicks off his sixth season of The Hour tonight with an intimate hour-long interview 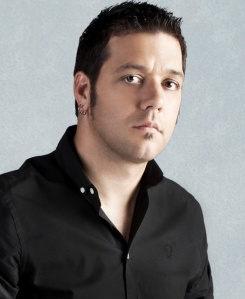 with Michael J. Fox. Other sparklies about to get Georged: Andre Agassi, Michael Buble, Drew Barrymore, Michael Douglas, John Irving, Michael Moore, Anne Murray, Edward Norton, Clive Owen, and Snoop Dogg … earlier in the evening Little Mosque On The Prairie returns with a new edge when Brandon Firla (Billable Hours) plays a manipulative minister from the big city who is less than thrilled to find a bunch of Muslims as tenants in his church. Zaib Shaikh, Sitara Hewitt, Sheila McCarthy, Carlo Rota, Debra McGrath and Arlene Duncan continue to keep the pot boiling … also returning tonight: Just For Laughs, with a premiere

episode from Montreal featuring Whoopi Goldberg, Jim Gaffigan, Louis C.K., Pete Zedlacher and Adam Hills. In addition to Zedlacher, Canuck showstoppers set to perform on the weekly series include Mike MacDonald, Deb DiGiovanni, Angelo Tsarouchas, Shaun Majumder, Martin Short, Jon Dore and Gerry Dee. So what’s not to like? … and Hot Docs is the co-presenter of tonight’s showing of Larry Towell’s Canada-Palestine co-production Indecisive Moments at the 2009 Toronto Palestine Film Festival, which continues through Friday. A personal video diary of Towell’s experiences in the Palestinian Occupied Territories, which he refers to as “the world’s largest open-air prison,” the film screens tonight at 7:00 pm at the Art Gallery of Ontario’s Jackman Hall, with filmmaker Towell in attendance. For more information and/or to purchase tickets, just click here.

NO PEOPLE LIKE SHOW PEOPLE: Newcomer Christoph Waltz, the breakout star of Inglorious Basterds, is set to play the villain opposite Seth Rogen in The Green Hornet … Jeff Bridges is in talks to star in a Coen Brothers remake of the classic John Wayne western True Grit … Meryl Streep’s daughter, actress Mamie Gummer, has been cast in director John Carpenter‘s new thriller, The Ward … and watch and listen for songbird Dawn Langstroth on a channel near you. She’s set to stop by AM 740 today at 2 pm to perform selected songs from her new CD Highwire in the radio station lobby. And tomorrow morning she’ll serenade early-risers on Breakfast Television (BT Toronto, that is.) So stay tuned!

LORD OF THE FLIES: When Canadian comedy icon Rick Mercer flew to B.C. to kick off the new Spread The Net campaign at Simon Fraser University, SFU biologist Carl Lowenberger, challenged him to stick his arm in a cage filled with mosquitoes — and you know how Mercer responds to challenges.  You can see the results on tomorrow night’s premiere of The Rick Mercer Report. (And I won’t even mention the bit where Lowenberger dares him to stick his entire head in the cage.) 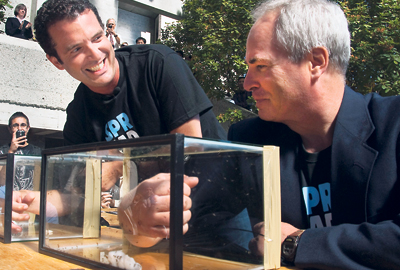 Meanwhile, Mercer’s spoof of that weird Michael Ignatieff commercial, which will be revealed to television viewers on RMR tomorrow night, has already ricocheted around the word as a viral video. And yes, it’s funny. Funny enough for Ignatieff to instantly install it on his Facebook page (not to mention his Twittering about it.)