A passion for Passchendaele

DUE NORTH: The Genie Awards are still three weeks away, but Paul Gross already knows he’s a winner. His remarkable Passchendaele has won the 2009 Golden Reel Award for most popular Canadian film of 2008, grossing (you should pardon the pun) more than $4.4 million in domestic box office receipts.

And when the Canadian Academy hands out the awards on Saturday April 4 in Ottawa, Gross — who wrote the script, directed the movie, starred as the protagonist and co-produced the epic World War I saga with Niv Fichman, Frank Siracusa and Francis Damberger — still has a crack at collecting another half dozen statuettes, because Passchendaele has been nominated for another six Genie Awards.

Also celebrating this week: Yves-Christian Fournier, winner of this year’s Claude Jutra Award for his directorial debut of Tout Est Parfait/Everything Is Fine, which has garnered no less than seven, count ‘em, seven Genie nominations.

Yes, the fellas are falling like flies. First it was Andrew Dice Clay, who was almost voted off by his own team until Donald Trump saved them the trouble and fired him, After the second show  Olympic skating champ Scott Hamilton got sacked by The Donald, and the only Canadian challenger, Tom Green, got the axe last Sunday night. 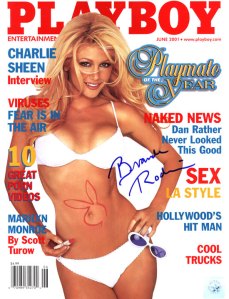 As much as she enjoyed her victory, Rivers says she was sorry to see them go. “Scott Hamilton,” she reports, “is someone I like a lot — a true gentleman.” As for Tom, “I like him more and more. If you cut through, he’s very smart.”

One of her teammates is brainy Playboy playmate Brande Roderick, who proved a great asset on their first outing.

“Brande seems very nice, but controlled,” says La Rivers. “Boy oh boy is she gorgeous. And I am very impressed that she can count above 20 wearing closed-toe shoes.”

“No, no, Brande is actually very smart … for a Playboy bunny. However they only put her in months that are easy to spell … May, June, July … “

Any tips on next Sunday night’s free-for-all?

ABSENT FRIENDS:  He was a veteran scene-stealer on stage and screen, from Speed-The-Plow to West Wing. But my favourite Ron Silver performance was in Sidney Lumet’s luminous lovesong to Manhattan, Garbo Talks, a charming and unexpectedly potent weeper.

In it Silver played a man trying to track down the eternally elusive Greta Garbo to bring her to the bedside of his ailing mother (Anne Bancroft) so she can die happy. En route Lumet gives us glimmering glimpses of a handful of wonderful New York characters, wonderfully well played by Carrie Fisher, Harvey Fierstein, Dorothy Loudon and Hermione Gingold, and when Silver finally confronts Garbo in Central Park, he delivers a three-hanky monologue with such understated brilliance that most actors still marvel at his chutzpah.

He will be missed.

SEE/HEAR: “Economists say that by this time next year, there could be fewer than 100 late-night talk show hosts!”

When it comes to Stupid People Tricks, nobody does it better. See for yourself, right here.

You win some, you lose some

Joan Rivers is on QVC today – the U.S. forerunner of our Shopping Channel, as if you didn’t know – selling  jewelry from her high-profile Boardroom Collection.

“The power of television!” La Rivers marveled on Twitter this morning. “The jewelry I wore last night on Celebrity Apprentice is being worn by the models at QVC and is almost sold out!” 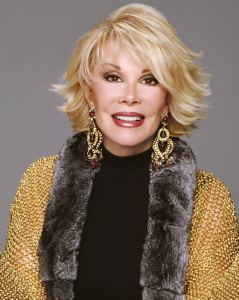 After last night’s two-hour opener  — which saw Joan’s team trounce Heisman Trophy winner Herschel Walker‘s all-male team – Rivers received lotsa pro & con reaction to some of her team members, including brainy Playboy playmate Brande Roderick and Alpha-female poker champion Annie Duke. When some of her friends called her to say how much they hate Annie, team leader Rivers remained uncharacteristically mum. “I could lie and tell them they’re wrong,” she twittered, “but then my nose would grow back.”

I’m already looking forward to the second installment next Sunday.

FALLING UP: After more than three decades of filing daily reports, much-loved New York showbiz columnist Liz Smith is nowhere to be seen in Manhattan newspapers this week. Now a celebratory 86, Liz got sacked last week by her current tabloid address, the New York Post. 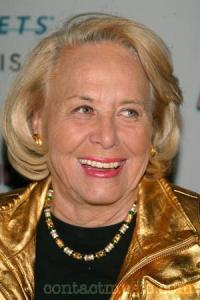 Still a regular blogger and TV gossipist, Liz considered herself just another newsprint casualty until reporter James Barron put her on the front page of the New York Times.  And then the phone calls and emails started pouring in.

“Liz, I think you have fallen a step up in leaving the Post,” Carol Burnett told her. Canadian crooner Michael Bublé, who had serenaded Liz at her 80th birthday bash, took time to call her. So did Barbara Walters and Whoopi Goldberg. “I also received a love note from the wonderful singer Josh Groban,” says Liz, “and loving support by e-mail from John Travolta, Tom Cruise and Sly Stallone.”

She also heard from Madonna, who asked, “What is New York without Liz Smith?”

Tom Brokaw called, and so did Warren Beatty. Liz also had “a riotous conversation” with Frost/Nixon star Frank Langella.  And her pal Candice Bergen sent her a cheery message “not appropriate for family reading.”

Ironically, you can catch up with Liz even more easily now, on www.wowOwow.com.

As expected, Carrie Fisher’s comments on this year’s Oscar weekend were true to form. (“Oh my God, there’s Madonna! Is she with that Jesus guy? Were you invited to her party with Demi on the night of the telecast? Yeah, me neither.”) Good news is that Sean Penn’s Milk producer Bruce Cohen is also producing the adaptation of Carrie last book, The Best Awful, a 4-hour thing miniseries to star Meg Ryan. Meanwhile Carrie has turned out yet another bestseller almost as funny as she is. Addicted to wordplay – remember her novel Delusions Of Grandma? – this one is called Wishful Drinking, and it’s all about growing up with Debbie & Eddie in Hollywood. But more about that (lots) tomorrow.