Man, have been remastered and repackaged for a 50th anniversary four-disc reissue (three CDs and one DVD), The 2000 Year Old Man: The Complete History, due in stores this week. Not only that, Toronto audiences well finally get to see Mel’s Broadway musical version of Young Frankenstein, now slated to play March 16 – April 18 at the Princess Of Wales … Helen Mirren is set to co-star with Bruce Willis and Morgan Freeman in a new thriller, Red, after she brings the National Theatre production of Phedre to Broadway with Dominic Cooper, the Mamma Mia boy toy currently on view with new scene-stealer Carey Mulligan in the hit TIFF star-maker An

Education … 40-year CHUM radio veteran Roger Ashby will be inducted into the Canadian Music and Broadcast Industry Hall of Fame at a Canadian Music Week dinner March 11 at the Fairmont Royal York Hotel … and talk about yer urbane cowboy! Rick Mercer goes a-ridin’ and a-ropin’ at the Edmonton Rodeo tonight, and actually lives to tell the tale, on CBC’s Rick Mercer Report at 8 pm.

FANGS FOR THE MEMORIES: He became David Frost in Frost/Nixon, shone as Tony Blair in The Queen, and plays legendary maverick U.K. rugby coach Brian Clough in The Damned United. So what does Michael Sheen have to do with that mess of a man pictured beside him? Yup – that’s 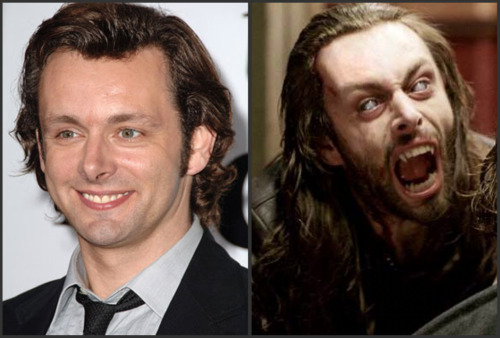 SHEEN: he sucks, but only in THIS movie

him. Sheen plays the vampire leader Aro in last weekend’s top boxoffice sizzler, The Twilight Saga: New Moon. And he makes no bones about why he took the role. “I knew it would make my 10-year-old daughter, Lily, very happy,” he confesses. And it has. “She’s got pictures from Twilight and New Moon everywhere in her bedroom,” he notes. “And now, she’s put her dad up there as well.” Just wait ‘til she sees him as The White Rabbit in Tim Burton’s bound-to-be-peculiar re-telling of Alice In Wonderland.

MAY IN NOVEMBER: Toronto Western Hospital’s Fracture Clinic and Medical Imaging Waiting Room is a happier place this morning after renowned

KARP: a gift to last

Toronto photo artist May Karp gifted 22 pieces to TWH. Karp’s uplifting photography is already on view in a number of Canada’s larger hospitals. In 2004 she donated 27 framed images for Toronto General’s new Surgical Centre waiting room, adding warmth and a new visual focus for the families of surgery patients. After seeing the impact of her photography in the Surgical Centre, Tennys Hanson, President and CEO of Toronto General & Western Hospital Foundation, asked her to consider a similar project for Toronto Western Hospital. “Hospital waiting rooms are for patients, sometimes for their relatives or friends,” Karp notes. “Most visitors are frightened and anxious. Time passes very slowly as they wait for results or treatment. One can almost ‘taste’ the emotions. Over 20 years ago I spent a lot of time in rooms like this. I experienced all the emotions many times since then.” Which is why her colourful, eye-catching and blissfully distracting works are brightening TWH this morning.

Glee & Nine go on the record.