Are the stars out tonight? Yes, for the Dora Awards. But not all today’s showbiz news is happy …

GOOD MORNING, TORONTO: And welcome to another week of razzle-dazzle in Our Town.  Sparklies set to join host Jian Ghomeshi on stage tonight at the 2009 Dora Mavor Moore Awards at the Winter Garden include Anne

Anglin, Cynthia Dale, playwright John Gray, Graham Greene, C. David Johnson, Tom McCamus, Colin Mochrie, National Ballet of Canada soloist Rebekah Rimsay, Ontario Culture minister Aileen Carroll and Mayor David Miller. Director Vinetta Strombergs and writer Briane Nasimok will be talent-wrangling from the wings … what’s NOT happening today? TheNational Post, which is attempting some creative cost-cutting by NOT publishing a Monday newspaper – a new policy that will continue through the Labor Day weekend …  and, of course, Monday garbage pick-up is NOT happening either — unless you’re listening to the right radio station. CFRB wise guys Bill Carroll and Jim Richards are taking trash talk to a new level by sending 1-888-I AM JUNK to pick up trash every week during the strike for six listeners who send the best emails telling why the station should pick up their garbage. The contest ends this Friday, and the winners can invite neighbours to drop off their trash for weekly pick-up as well! 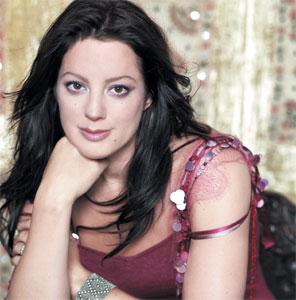 NO PEOPLE LIKE SHOW PEOPLE: Singer Paul Potts, who was the Susan Boyle YouTube sensation of his day when he first triumphed on Britain’s Got Talent, serenades tomorrow night at Kitchener’s elegant Centre In The Square. Torontonians will have to wait a couple of weeks more, when he performs here at the Elgin on July 18 … superthrush Sarah McLachlan and Quebec charmer Marie-Jo Thério will headline the party at Parliament Hill on Wednesday night in Ottawa. CBC Television, Radio-Canada and bold will telecast highlights at 9 pm … Tim McGraw and Reba McEntire

are set to headline the first annual Cavendish Beach Music Festival on Prince Edward Island on July 10, 11 and 12 … Jon Dore is hosting two nights of comedy mayhem at the Rivoli July 15 & 16 with a very catchy title: The Jon Dore Television Show’s Writers and Jon Dore of the Jon Dore Television Show Stand-Up Comedy Show, Show! Expect an evening of stand-up comedy featuring Dore and his writers Mark Forward, Laurie Elliott and Steve Patterson. “It is important to understand,” adds Dore manager Lorne Perlmutar, “that none of the proceeds of this show will be going to a charitable organization. Jesus is cool.” Whew! That’s a relief … and did you know that Seinfeld alumnus Jason Alexander is an accomplished song-and-dance man? He’ll show off that next-to-secret skill set when he appears at Casino Rama July 25.

FLICKERS: Chalk up another win for enduring filmmaker Ron Mann. Last week he received the 2009 Premier’s Award for Excellence in the Arts. Mann, whose hit doc Know Your Mushrooms is now available on DVD, won the award for Individual Artist, and then selected Toronto actor and film-maker Charles Officer (Nurse. Fighter. Boy) as the Premier’s Emerging Artist prize winner … Canuck heartthrob Taylor Kitsch will team up with one of his Wolverine co-stars, Lynn Collins, in the Disney adventure John Carter of Mars. And talk about yer parent traps — Greg Kinnear and Kelly Preston will play Miley Cyrus’

parents (!!!) in The Last Song, also for Disney … our National Film Board and the Shorefast Foundation will establish Newfoundland’s first e-cinema installation, the NFB’s first English-language e-cinema partnership in Canada.

The new system will use new digital technology to give residents and visitors to Fogo Island access to great works of Canadian cinema from the NFB as well as independent filmmakers. Fogo Island, by the way, is the largest of the offshore islands of Newfoundland and Labrador, and the new project will be launched this November … and management of the merged British film studio Pinewood Shepperton, where The Dark Knight, The Bourne Ultimatum and most 007 epics are shot,  has signed a five-year deal

to take over the seven state-of-the-art sound stages of Toronto’s struggling Filmport, which will now become Pinewood Toronto Studios.

APRIL SHOWERS IN JUNE: Quite naturally, lots of other news was overshadowed last Thursday by Farrah Fawcett’s passing and the shock waves caused by Michael Jackson’s unexpected demise. The saddest of the lot, for me, was the confirmation that legendary CBS News anchorman Walter Cronkite is seriously ill with cerebrovascular disease and is “not expected to recuperate.” And to add to that unhappy news — not that you were looking for more — neither Mike Wallace nor 60 Minutes creator Don Hewitt are doing very well at the moment.

T.S. Eliot claimed that April was the cruelest month.

Maybe. But this year, June is no picnic either.

One response to “Are the stars out tonight? Yes, for the Dora Awards. But not all today’s showbiz news is happy …”