Funny thing, but these guys are pretty funny! 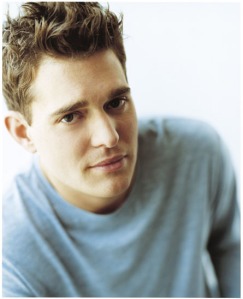 FUNNY FELLAS:  Two of the world’s best crooners are becoming almost as celebrated for their irreverent sense of humour as they are for their spectacular vocal abilities.

Josh Groban, who first won hearts when he romanced Calista Flockhart on Ally McBeal, did such a great scene-stealing solo at the Emmy Awards that his number on that show is now a YouTube favourite. To see and hear Josh joshing, in perfect pitch, click here.

Then again, maybe it’s something about being on awards shows. Michael Bublé enjoyed his comic turn with Russell Peters on last month’s Junos awards so much that he put a link to it on his website. Which links you to the CTV website. Which lets you see Michael and Russell clowning around backstage. Or, you can just click here.

HAIL CAE$AR:  Have you ever raised your glass to toast what is actually in your glass? Sounds weird, but no, you read that right.

The Bloody Caesar, that uniquely Canadian concoction, turns 40 this year, and isn’t even remotely shy about it. What else was happening in 1969? Says Mark Teo in SHARP Magazine for Men:

“These Eyes by the Guess Who … dominated the radio waves. The Montreal Expos debuted as Canada’s first major league baseball team. Canada’s now-distinct multi-coloured currency was introduced. Canada’s sharpest political satirist was born in the form of Rick Mercer. And a Northern cocktail revolution was germinating in the mind of Walter Chell at the Calgary Inn.” For more of Teo’s engaging birthday history of the savoury Caesar – including some variations that most purists will not approve of – just add ice and click here.

FUNNY GIRL:  When she’s not on camera on Little Mosque On The Prairie you can usually find Deb McGrath fervently engaged in her favourite sport: Shopping. In last Saturday’s Globe & Mail, aided and abetted by G&M staffer Deirdre Kelly, McGrath was the guest writer for the My Last Stupid Purchase column.

Her purchase? ‘A cool and pricey boho chic Zac Posen skirt,” snagged for a song at Holt Renfrew’s. But it wasn’t nearly as appealing when she tried it on again at home.

“Never buy anything tight when you are having a flat-stomach day,” warns the now poorer but possibly wiser Ms McGrath. “Flat stomach days are like leap years and blue moons.”

Mind you, she knew that one day her flat stomach would appear again – and it did, after a week of stomach flu. “But by then,” she notes, “my skirt was out of season!”

HAIL TO THE CHEF: Canadian Film Centre chief Slawko Klymkiw is in L.A. today to celebrate film director Norman Jewison, a man who has cooked up some mighty tasty film treats over the years, from Jesus Christ Superstar to Fiddler On The Roof, from The Thomas Crown Affair to Moonstruck, from A Soldier’s Story to In The Heat Of The Night, from The Russians Are Coming, The Russians Are Coming to Agnes Of God.  And as if that wasn’t enough, Jewison also founded the Canadian Film Centre a mere 20 yearts ago, raising the bar to create a new standard of excellence for young Canadian filmmakers. Tonight’s tribute at the Los Angeles County Museum Of Art will be hosted by veteran film critic Leonard Maltin, and you can be sure some of Norman’s chums will show up to cheer him on. Happily, I’ll be there too, to tell you all about it on Monday. (Promise.)

Have a great weekend!