What up in T.O. tonight, tonight …

Attention, West Side Story fans : Tune in to Stratford at 6:30 pm tonight — that’s www.stratfordfestival.ca on your laptop —  for the first live webcast of the new season.

On tonight ‘s show Festival chief Antoni Cimolino chats with his new Tony (Paul Nolan) and Maria (Chilina Kennedy.) (Am I the only one who’s really curious about this young lady’s first name? We’ll see,)

Cimolino, of course, played Tony in the original Shakespearean version of West Side Story at Stratford. In those days it was still called Romeo & Juliet, and his Juliet was current Soulpepper stage lioness Megan Follows. But that, as they say, is another story.

Crowd-pleasers Greta Hodgkinson, Guillaume Côté and Sonia Rodriguez will be among the bright lights dancing up as storm in the three-ballet program … and Frédérique Vézina and David Pomeroy will headline Puccini’s  evergreen La Bohème when the new Canadian Opera Company production premieres next month.

They’re all senate nominees for the maverick arts watchdog group Department Of Culture, who are believed to have made a considerable impact on this country’s most recent election results.

Check ‘em out at www.departmentofculture.ca

LITERATI:  Okay, relax — Zoomer  is not, repeat, NOT going under. 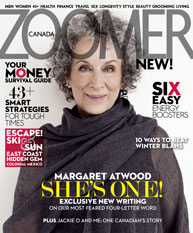 The current ad campaign urging us to get the magazine “while it lasts” is about its current issue, which is even better than the three that preceded it, and features some of the best photos ever seen of Can Lit lioness Margaret Atwood. Secret of the fabulous photo shoot is that Miss A.’s photographer was none other than rock icon Bryan Adams, whose eye is becoming almost as celebrated as his vocal chords … and even though the Canadian edition of Time magazine ceased publication on Dec. 29,  Time Canada is making an elegant exit by sending its subscribers refund cheques instead of bouncing their subscriptions to the U.S. edition. Now that’s class.